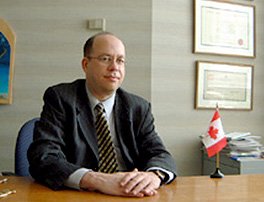 Max Berger is a native of Winnipeg, Manitoba and was educated at the University of Manitoba and York University. Mr. Berger is a graduate of Osgoode Hall Law School in Toronto, Canada. Max Berger Professional Law Corporation is a leading Canadian immigration law firm with offices located in Toronto, Ontario and Montreal, Quebec. Mr. Berger specializes in all areas of immigration law, including independent or skill-based immigration, business immigration (entrepreneurs and investors), temporary student and employment visas, family sponsorships and refugee claims and appeals. Mr. Berger has been appearing regularly before the Immigration and Refugee Board since the creation of the Board in 1989, as well as in the Federal Court and Supreme Court of Canada. Many of the firm’s associates have gone on to distinguish themselves in the area of immigration law or have been appointed as judges at the Immigration and Refugee Board, Ontario provincial Court and the Federal Court of Canada.

The Canadian Express Entry Program has only been around for a few years. In a nutshell, the program is designed to give the best applicants…

Thousands of refugee cases suspended due to border agency delays